by Duong
in Kent 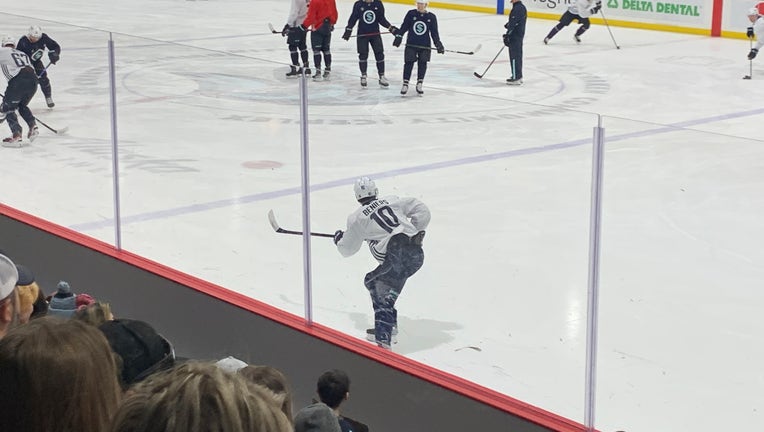 Kraken center Matty Beniers skates with the team for the first time since signing his entry level contract with the team on April 11, 2022 at the Kraken Community Iceplex. (photo by Curtis Crabtree / FOX 13 Seattle)

SEATTLE – The Seattle Kraken will get to see top draft pick Matty Beniers play for the team over the final 10 games of the season.

Beniers, 19, signed his three-year entry level contract with the team this weekend after the University of Michigan was eliminated by the University of Denver 3-2 in overtime in the Frozen Four. Fellow Michigan draft picks Owen Power (No. 1 overall) and Kent Johnson (No. 5) also signed their deals over the weekend with the Buffalo Sabres and Columbus Blue Jackets, respectively.

Though the Kraken haven’t officially declared their intention yet, it appears as though Beniers will make his debut Tuesday in Calgary against the Flames. His home debut will be this Saturday against the New Jersey Devils. Beniers said he had family making the trip to Calgary to be there tomorrow night.

“I think that first couple minutes and walking out onto the ice with the packed crowd, that will be cool and really exciting and probably some chills and some nerves jumping in there too,” Beniers said after his first practice on Monday.

Beniers was named a first-team All-American for his play during his final season at Michigan. He was a top 10 finalist for the Hobey Baker Award, which is given to the top player in college hockey. He put up 43 points this season for the Wolverines with 20 goals and 23 assists in 37 games played.

“It was pretty crazy. Obviously devastating,” Beniers said of the loss to Denver and the 48 hours that led to his eventual signing with Seattle. “We weren’t able to get the job done but it was a great year overall. I had a lot of fun and then got home and had some tough discussions with my parents and found that this was the best decision for me. I’m here and I’m so excited to be here, so I’m happy I made that decision.”

General manager Ron Francis said that they appreciated that losing with Michigan affected Beniers and that it took him a little time to come to the decision to sign his deal with the Kraken.

“The reasons why we liked Matty when we drafted him were there this weekend,” Francis said. “He was all-in on winning a national championship and when it didn’t happen, it bothered him. It took some time for him to sort of sort through things and get to the decision that he felt was best for him. We’re excited about that. We know he’s all-in when he gets here and we’re proud that he was that invested in trying to win a title there, for sure.”

“It’s really just about getting Matty into the mix,” head coach Dave Hakstol said. “Obviously it’s just nice to have him as a part of the group. … He’s had the ability to come in and get a good practice in with the intention of getting into the lineup tomorrow. It’s an exciting time for him. I really like the way he’s handled himself coming in on short-term here with a lot going on, carries himself well, carries himself with great confidence, yet he has really nice balance of respectfulness and humility to him and I think that’s going to serve him well coming into our dressing room.”

Beniers will now begin his path of trying to bolster the Kraken’s offense. A lack of scoring firepower has been one of the team’s biggest areas of concern during their inaugural season. With four forwards traded at the trade deadline last month, the production has been further curtailed as the team resets for the future.

Entry-level contracts in the NHL are three-year deals. Bringing in Beniers this year for the final 10 games will count as the first year of his rookie contract. While that is a drawback for the team, Francise said last month that it’s just the reality of a top draft pick. The plus side is that Beniers gets to experience the NHL up close for the next three weeks before getting a whole offseason to prepare for his first full season. 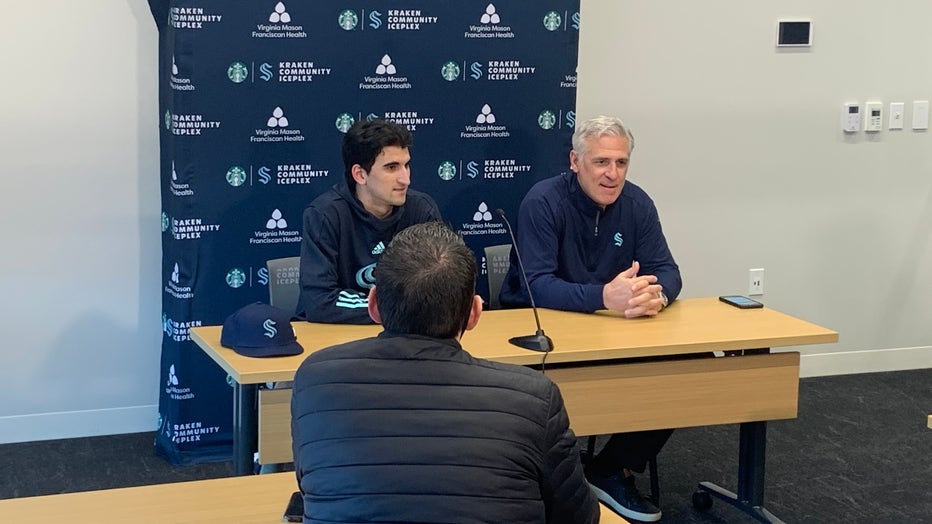 One Killed In Deadly Crash On I-5 In Kent

Published April 9, 2022 11:03AM Updated 11:31AM article KENT, Wash. - One person is dead after a single-car crash on Interstate 5 Saturday morning, authorities say.  According to Washington State Patrol (WSP), a driver crashed and died on northbound Interstate 5, just north of State Route 516.  Authorities say one person...