TACOMA, Wash. – A 15-year-old has been arrested in connection with a deadly Tacoma pot shop robbery in mid-March.

On March 19, two teens robbed the World of Weed on the corner of E. 32nd St. and Portland Ave at gunpoint, shooting and killing 29-year-old employee Jordan Brown. Brown was pronounced dead at the scene. 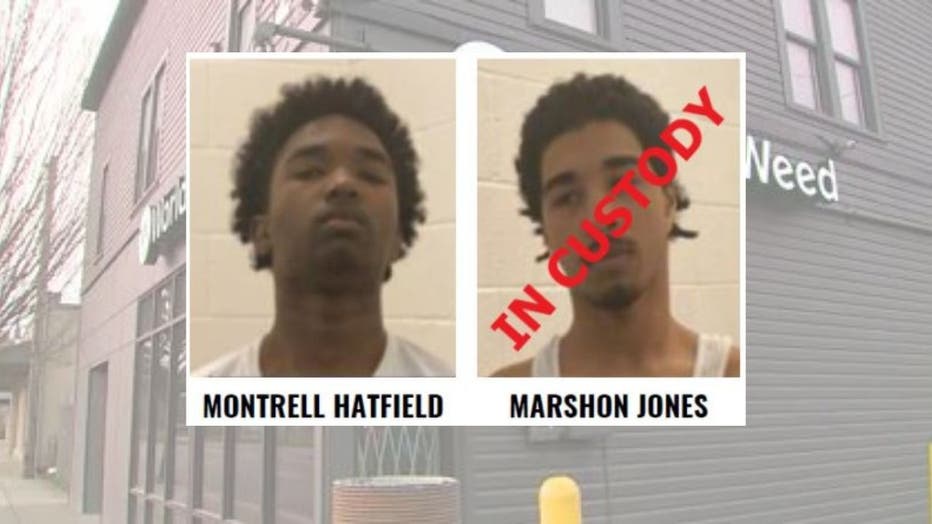 Jones was arrested in Kent on Monday and was sent to Remann Hall Juvenile Detention Center, where he was booked for first-degree murder.

Both Jones and Hatfield are connected to several other violent robberies throughout Western Washington in the last few months.

According to King County court documents, police say Jones and Hatfield, with a third unarmed suspect, robbed a pawnshop in Federal Way on Feb. 22.

The documents allege Hatfield and Jones pointed guns at customers and employees, fired a bullet, and pistol-whipped an employee saying, “I know you have more (money).”

According to the court documents, the suspects got away with about $30,000. However, police caught Hatfield and Jones hiding in a nearby apartment complex, the documents said.

The teen suspects appeared in court on Feb. 24, where the King County Prosecutor asked for Hatfield and Jones to remain in custody.

Officials with the prosecuting attorney’s office say they found out that Jones and Hatfield cut off their GPS tracking bracelets, and a warrant was issued for their arrest on March 16.

Over the last few weeks, the images of both Jones and Hatfield have been broadcast throughout the region as law enforcement worked to find them.

However, according to police, that did not stop the two from continuing their crime spree.

Seattle Police say the suspects robbed a jewelry store in Seattle on April 6.

According to Pierce County court documents, these teens are also suspected in at least 10 other cases in both King and Pierce Counties.

Hatfield is still outstanding and considered to be armed and dangerous. Anyone with information on his whereabouts is asked to call Crime Stoppers at 1-800-222-TIPS or 911.

Additional charges are expected against the teens.

Amid a rise in pot shop robberies, police are trying to track down the bandits before someone ends up dead: “I got shot in the leg, I got shot through and through in the arm, I got shot through the abdomen.” And legal marijuana dealers who pay billions in taxes are asking why the government put them in a bind and then turned a blind eye: “If we could take credit cards, everything would change overnight.”

Western Washington has seen a rise in pot shop robberies, and sometimes, those robberies have turned deadly.

Over 80 armed pot shop robberies have been reported across western Washington since January, though that number is likely higher.

As crime increases, shop owners are asking the Liquor and Cannabis Board for armed security guards, training to protect employees and additional funds to cover the costs of the safety protocols they’re adding out of their pocket.

Business owners are pushing for the SAFE Bank Act which would allow federally regulated banks to serve pot shops like any other business.

More Active Weather Continues Across The Northwest Into Next Week.

Published April 9, 2022 9:24PM Seattle - Hard to believe that just a couple of days ago temperatures were in the low to mid 70s!  Now we're some 20+ degrees cooler with the potential for lowland snow!   Saturday's highs climbed into the upper 40s around the region with plenty of...